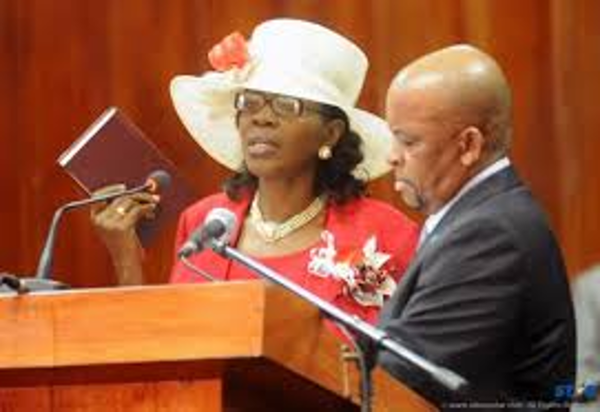 Do You See A Woman Prime Minister Of St.Lucia in The Near Future?

Chaim Roserie, comes from Caribbean parentage. His Mother is from Guyana and father from Saint Lucia. He was born in Brooklyn, New York, but raised in Mississauga, Ontario, Canada.

This 16-year-old footballer was signed recently by the Jacksonville Armada in the North American Soccer League. Making him the second-youngest player on an NASL roster in the modern era, Chaim can play for any of four countries in international football.

Growing up in Toronto, Canada, he played for West Toronto Cobras and Mississauga Falcons, considered to be some of Canada’s most elite clubs. He also attended St Joan of Arc Catholic Secondary School in Mississauga, where he was named Most Valuable Player in 2010 and 2011.

Here is a quick interview with Chaim Roserie

Having also had exposure in the AC Milan Training Camp in 2008 and 2009, Chaim was ready for his American move in August 2014, when he signed on to the Armada’s 25-man development roster. Aged just 15, he was easily the youngest player in a squad full of mature men.

Armada FC General Manager, Dario Sala had this to say about Chaim, “Chaim is a tremendous young prospect for our club, He has a great amount of potential, and we look forward to seeing him develop and working to become a fixture in our lineup in the future.”

Chaim Roserie has options available to him, and choices to make in years to come and is currently awaiting official clearance to compete in official matches for the Armada, He did play 16 minutes in a friendly against legendary Argentine side Boca Juniors, providing a pretty back-heeled assist in the Armada’s 2-4 loss.

Personal: Son of Lay Peter Roserie…post-grad goal is to become a millionaire…chose Florida Tech for the education.

Keep your eye on the ball Chaim. Your future is bright.

Chaim Roserie, a prodigy from Mississauga, Ontario, Canada, spent his youth career playing at the Mississauga Falcons and West Toronto Cobras, considered to be some of Canada’s most elite clubs. He also trained at the AC Milan Training Camp in 2008 and 2009.

Named Most Valuable Player of his school’s team, St. Joan of Arc Secondary School, in 2010 and 2011.At 16 years, seven months and 21 days, Chaim Roserie was the second-youngest player to sign with an NASL club in the modern era… Only behind FC Edmonton midfielder Hanson Boakai who holds the record at 16 years, three months and 23 days, signing with the Eddies on Feb. 20, 2013.

Chaim Roserie was invited to try out and has been training with the team since last August of 2014… he has not be eligible to play in official matches for the Armada FC until clearance is received from FIFA due to the fact that Roserie has been a minor. He has, however, continued to train with the team and is available to compete in friendlies.

St. Lucia has withdrawn from qualifying for the 2022 World Cup.

FIFA made the announcement Thursday, when St. Lucia was to have played Nicaragua in the delayed start of qualifying in North and Central America and the Caribbean.

Nicaragua, Haiti and Belize remain in Group E; the group winner faces a team from Group B — Canada, Aruba, Bermuda, Cayman Islands or Suriname — in a two-match playoff for a berth in the eight-nation regional final round that starts in September and will produce three qualifiers.

St. Lucia, a Caribbean island nation ranked 175th, is the first of 211 nations to withdraw from qualifying, which has been reconfigured due to the coronavirus pandemic. Host Qatar is guaranteed a berth, and the other nations are competing for 31 slots in the tournament, to be played from Nov. 21 to Dec. 18 next year.

FIFA’s disciplinary committee may impose sanctions for a withdrawal, but sanctions usually are contemplated in the event of a boycott.

St. Lucia, a Caribbean island nation ranked 175th, is the first of 211 nations to withdraw from qualifying, which has been reconfigured due to the coronavirus pandemic. Host Qatar is guaranteed a berth, and the other nations are competing for 31 slots in the tournament, to be played from Nov. 21 to Dec. 18 next year.

FIFA’s disciplinary committee may impose sanctions for a withdrawal, but sanctions usually are contemplated in the event of a boycott.